As part of National Science Week 2021, researchers from the Quantum Technologies and Dark Matter Lab at the University of Western Australia—Aaron Quiskamp, Ben McAllister, Catriona Thomson, Cindy Zhao, Elrina Hartman, Jeremy Bourhill, Mike Tobar and William Campbell—piled into a minibus and embarked on the Quantum & Dark Matter Road Trip, visiting schools and communities across southwest Western Australia.  It was a resounding success, thoroughly enjoyed by the road-trippers and those they visited along the way.

Over the five-day trip, the team spoke to nine classes across seven schools and delivered three public events, reaching a total of roughly 1,000 students, teachers and members of the public.  They engaged their audiences through demonstrations such as a water clock and an umbrella-based proof of the existence of dark matter, provided a sneak peek into the lives of physicists, and talked up the cutting-edge research being done at the ARC Centres of Excellence for Engineered Quantum Systems and Dark Matter Particle Physics.

Mike Tobar delivered a public lecture on quantum technology, measuring time, sapphire clocks and the search for elusive dark-matter particles.  On display during the talk was a sculpture by local artist Duncan Moon, Tempus fugit, which explores the human perception of time and space.

The team had a stall at the Newton Moore Senior High School STEM Community Fair, during which Ben McAllister gave a public talk about dark matter and how quantum technologies are being used in dark-matter searches.  They also set-up their demonstrations at the Rose Hotel, facilitating fruitful discussions with local punters.

This initiative was enabled by funding from National Science Week Small Grants, and the ARC Centres of Excellence for Engineered Quantum Systems and Dark Matter Particle Physics.  Thanks also to Linda Barbour for helping to organise the road trip. 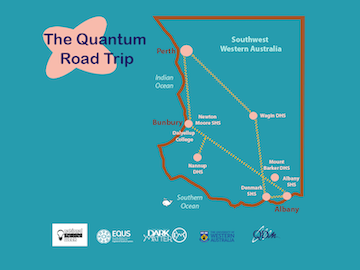 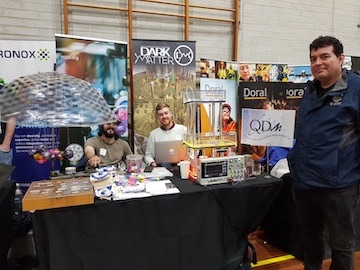 Jeremy, Ben and Mike at the Newton Moore Community Fair 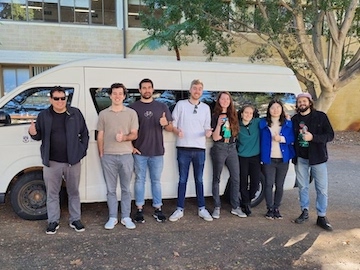 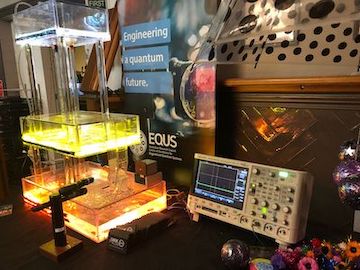